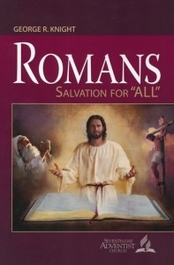 For I am not ashamed of the gospel of Christ, for it is the power of God to salvation for everyone who believes, for the Jew first and also for the Greek. —Romans 1:16, NKJV

Romans, more than any other book, sparked the Protestant Reformation. No other single document has so impacted the development of Christianity. Romans, above all, is a powerful and insightful treatment of God’s plan to save human beings through Jesus Christ and thus speaks to every generation.

Amid an undercurrent of conflict between the Jews and Gentiles, Paul lays out the most complete theological explanation of the plan of salvation in the New Testament. One of his goals is putting to rest any confusion as to his message regarding grace and the law that may have arisen from previous letters to Galatia and Corinth. Thus,  throughout Romans, Paul tackles several theological themes:

“All of us are daily confronted by the problems of sin and guilt. And every Christian rejoices in the amazing grace of God who welcomes us in spite of ourselves. Thus it is not only true that Paul’s letter is relevant but that its message is second to none in the Bible or elsewhere in importance for daily living in a complex and troubling world.”

Bla i boka her:  https://www.adventistbookcenter.com/fileuploader/download/download/?d=1&file=custom%2Fupload%2FFile-1505827665.pdf

Georges Knight is a retired professor of church history at the theological seminary at Andrews University. He is the author of many books, including the Adventist Heritage series, the Ellen White series, and a devotional Bible commentary series.