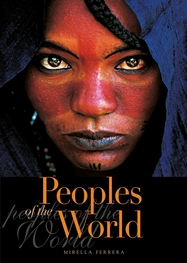 En engelsk bok om folkegrupper som bor på ekstreme steder. Teksten på baksiden av boken er slik:
They live at impossible altitudes on the roof of the world, in the extreme north lashed by freezing winds, in baking deserts where they trek from one oasis to another and in the equatorial jungle where the sunlight has difficulty reaching the ground: these are the peoples of the world, the holders of cultural rather than genetic differences, civilizations whose lives follow a rythm different to that of the industrialized world. They are human groups and societies in continual evolution, with an extraoridnary capacity for interchange, which leads to the infinite number of variants that together we refer to as Humanity.